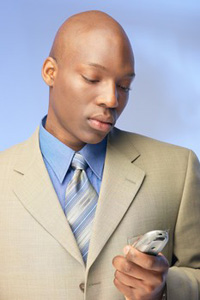 Technology is a tricky thing. We want gadgets to do things for us and at light speed, so we can get on to doing whatever else it is that we want to do. And when those gadgets don’t do their job in the time it takes light to travel from place to place, we complain about how slow those data transactions are, as if they’ve always been fast.

The fact is, many devices, especially mobile ones, are not built like computers, even though they are increasingly packed with PC-like functions and applications. The tiny processors that make up the brains of mobile devices are hard-pressed to keep up with the massively complicated operations that they are tasked with doing these days. If you’ve ever tried to surf the Web with your handy mobile phone, you know this kind of pain.

Scientists say that the human experience notices a delay that is longer than 100 milliseconds. Any transaction that takes less time than that will go unnoticed to the human eye and brain. The problem is that even today’s most enhanced mobile devices don’t come close to that 100-millisecond threshold. The result is milliseconds of frustration on the part of the human operators.

And as each technological innovation comes along (such as 3G, EDGE, HSDPA, Wimax, etc.), the hope grows that data-transfer rates for mobile devices will catch up to user demands. One such technology, still in development, is called 3G-LTE. The acronym is for Long Term Evolution, and the target is 100MB per second. That’s a far cry from even the advanced HDSPA rate of 1.5MBps.

The bottom line is that what is being offered for handhelds these days is far heavier on a data stream scale than what can be handled by those handhelds in what most people would consider “a timely fashion.” And especially with mobile TV on the horizon, handheld developers are increasingly under pressure to deliver products that can keep up, both literally and figuratively.

What should you as the consumer do? Be patient. Remember that you always have a PC to do your heavy data lifting. And know that even now, researchers are hard at work trying to bridge the “speed gap.”