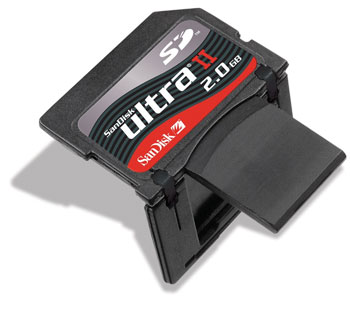 In a flurry of communications, SanDisk has announced the availability of several upgrades in its industry-leading memory card series.

The 4GB Ultra II Memory Stick PRO Duo card doubles the capacity of the previous card in the Ultra II line. The card’s minimum write speed is 9MB a second and minimum read speed of 10MB.

A series of additions to the Extreme III card line. Three in all, they include the the 8GB CompactFlash card, the 2GB SD card, and the 2GB Memory Stick PRO Duo digital film card. Each card boasts minimum write and read speeds of 18MB a second and features the company’s Enhanced Super-Parallel Processing technology, which combines, among other things, NAND flash memory chips and 32-bit RISC processing. One other compelling feature is the company’s own RescuePRO software, which allows easy recovery of lost or deleted images or data.

Pricing and availability is as follows;