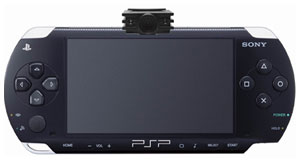 The Sony PlayStation Portable (PSP) has been on the market for quite some time, and has challenged Nintendo’s supremacy in the world of portable gaming. Just as the Nintendo DS recently received an update – the DS Lite – it seems now that Sony’s portable gamer is about to get an upgrade as well, except the changes are more than simply cosmetic.

Sure, the PSP2, as it has come to be known, might be a quarter-inch thinner than the currently available unit, but more interestingly, word is that the new PSP will come with 4GB of NAND flash memory, as well as an integrated digital camera. Expect white, black, and silver varieties.

This is contrary to earlier reports that there would be 8GB of embedded storage, perhaps in an attempt to keep the price a little lower. The digital camera will not be a new development altogether, as it seems the PSP2 will make use of the camera used in some Sony Ericsson phones. The cam will be placed where the PSP logo currently lies, just underneath the screen, and will be used for video-streaming to the forthcoming PlayStation 3 (whenever that hits the market. Your guess is as good as mine) and “as a Wi-Fi way of chatting with friends.”