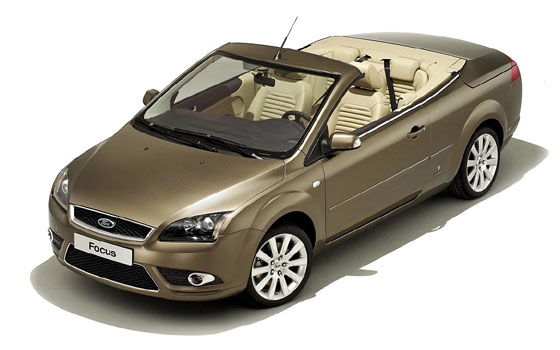 At next week’s Geneva Motor Show, Ford is taking the top off of its entry-level vehicle. The Focus Coupe-Cabriolet makes use of a similar origami-folding metal roof as that found on the Volkswagen Eos, and we all know how valuable a hard top can be during those winter months.

Don’t expect a heck of a lot of power out of this thing. Two gasoline engines will be offered at launch, with the 1.6 litre version putting out an abysmal 99bhp, and the 2.0-litre getting 143bhp. That said, no one ever said this Focus was a sports car, and with gas prices the way they are, maybe this isn’t too bad a deal. Ford will also offer a 2.0-litre turbodiesel for 134bhp.

While the front of the car will immediately look familiar, the rear has had a facelift. The back end was restyled by Italian design house Pininfarina, the same people that dabble in Ferraris and other exotics from time to time.

Look for the Ford Focus Coupe-Cabriolet on the streets of the UK this September, with prices starting in the £17,000.