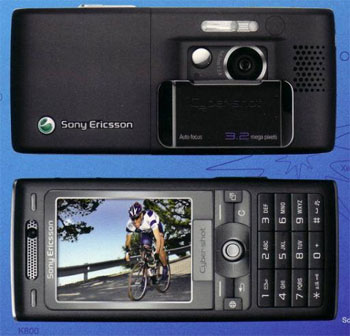 Fueling rumors that a Cyber-shot Sony Ericsson mobile phone is in the offering is an image of the said cell phone on the German blog www.telefon-treff.de. The news is not really that surprising is it? After the huge success of the Sony Walkman phones, it sort of follows that Sony will be following this up with Sony Ericsson camera phones sporting the Cyber-shot brand.

By the looks of it, the Sony Ericsson K800, codenamed Wilma, features a 3.2MP digital camera and will also feature the sliding cover lens design for which the Sony Cyber-shot DSC-T series is known for.

Adding credence to the fact that this is indeed the Sony Ericsson K800 is the specifications sheet that also appeared on the German site. According to the posted specs, the new mobile phone’s dimensions are 106x47x18 mm and weighs 115 g. It also features a 2-inch color screen with QVGA resolution.

Other features of the 3G mobile phone include an FM tuner, USB 2.0, Memory Stick M2 slot, 64MB of internal storage and of course, digital camera features such as Xenon Flash, 16x digital zoom, red-eye reduction, and an image stabilizer.

So is this the real thing or not? Well, we will all just have to wait and see…