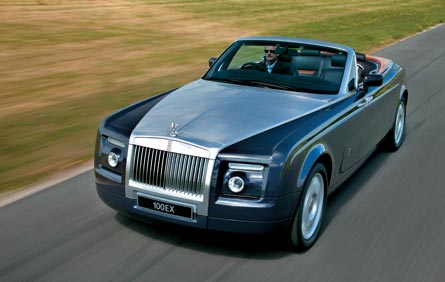 Rolls-Royce and Bentley used to be sister brands in the realm of British ultra luxury, but now that the two automakers are owned by different companies – RR is a part of the BMW family, whereas Bentley is under the Volkswagen umbrella – they have come into direct competition with one another.

We first saw the Rolls-Royce 100EX concept convertible at the 2004 Geneva Motor Show, and it seems that at this year’s show, we’ll be able to get a good look at the production model that just might be hitting driveways at high-end country clubs and multi-acre estates some time next year. The project currently goes by the name of “RR02”, so you can probably expect a name change before it goes to market.

Under the hood you’ll find the same 6.7-liter V12 found in the Rolls-Royce Phantom limousine, the brand’s only vehicle at this time, putting out 453 hp and 531 lbs-ft of torque. That said, because this is a “sporty” vehicle, those numbers might get even more impressive in the “RR02”.

If you have to ask about price, you probably won’t be able to afford the Rolls Royce convertible, because it will likely fetch more than the $341,000 Phantom.