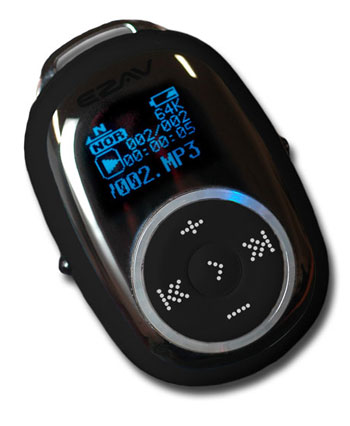 Advanced MP3 Players is selling the PEBBLE, a hand-built, organically-shaped MP3 player that weighs a measly 20 grams with dimensions of 47x32x13mm, making it one of the tiniest MP3 players we have seen.

The MP3 player may be small but it’s still packed with features. It offers users an FM tuner, FM recorder, 64×48 pixel blue on black OLED display, USB 2.0 and 3D sound. As far as your audio files are concerned the PEBBLE supports MP3, WMA and ASF music files. And just because it’s small doesn’t mean it is deficient when it comes to sound. The unit offers 20mW per channel, giving you a total sound output of 40mW.

The PEBBLE also comes with a built-in lithium polymer rechargeable battery, offering users more than 12 hours of ‘music time’. The display is a semi-reflective silver mirrored front, which sparkles and glistens in daylight. Great for catching someone’s attention don’t you think?