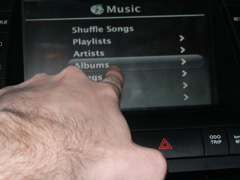 It’s not exactly going to come rolling off the assembly lines anytime soon, but it is in the car of innovator Jeremy Kusnetz, who had to wrangle a few adjustments in order to make his passion become a reality.

The interface is a dashboard monitor, and the rest is pure electronic wizardry. First, it was a PowerBook (laptop); then, it was a Mini (monitorless computer). Now, it’s theater-quality movies in the car, 24/7.

By the way, Kusnetz had to write his own script and make some of his own audio connections for this experiment; it’s not exactly your try-at-home for the technologically faint at heart. But if you do want to take your Mac in the car with you and you want to take your theater with you as well, then this is one solution.