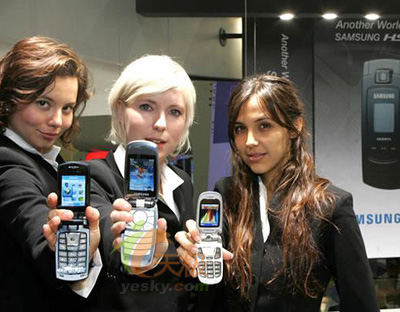 Europe is going to have some new Samsung goodness on its hands very soon. Korea’s leading cell phone manufacturer is set to release the SGH-Z560 to the European market in the second quarter of this year. This HSDPA-enabled handset supports data rates of up to 1.8Mbps, and is the first of its kind for that corner of the globe.

Unveiled at the 3GSM World Congress in Barcelona, the SGH-Z560 is a super slim phone with merely 16mm of thickness. Despite its thin profile, this handset also comes with an auto-focussing 2-megapixel camera to go with its 2.3-inch QVGA 262K LCD. Easily access and control your tunes with the external touch music keys, and store all your multimedia onto the 30MB of on-board memory. Of course, you’ll probably make use of the microSD expansion slot as well.

Samsung says that they can go as high as 3.6Mbps with HSDPA, which they say is faster than what can be offered by WCDMA or GSM/GPRS.