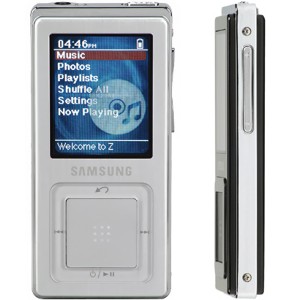 In a world where being a distant second best to Apple is considered a monumental achievement, Samsung is hoping to make leaps and bounds with its flash-based YP-Z5 MP3 players. Originally unveiled last month, the 2GB YP-Z5A and the 4GB YP-Z5Q are making their way to the United States (and presumably Canada, as well) some time soon.

Apple probably doesn’t have too much to worry about, realistically, but these new digital audio players from our friends in Korea are certainly a viable alternative to that player prefixed with a lower-case “i”. Like the nano, these won’t be able to do video out of the box, but you will be able to handle your standard MP3 and PlaysForSure WMA formats. The color 1.8-inch LCD is more than adequate, as is the reported 38 hours of battery life.

You’ll be able to pick up the Samsung YP-Z5 players in either black of silver, with prices at $200 for the 2GB version and $50 more for a 4-gigger.