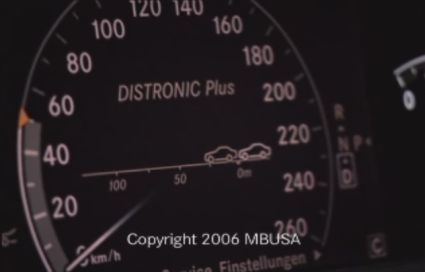 The battle for luxury car superiority continues. Fighting for market share among the likes of BMW, Audi, and Lexus, Mercedes-Benz has unveiled the new Distance Plus radar cruise control system, which is designed to work under stop-and-go city traffic conditions. Available in the new S-Class sedans, this system allows the car to virtually drive itself, short of you having to steer it from time to time.

On the dashboard is the image of two tiny cars moving toward and away from one another, as you get closer and further away from the vehicle in front of you. Of course, you could just as easily (if not more so) look up from your dashboard to see the car in front of you, but then, why would you want to do that?

Useless? Maybe, but if they start integrating this technology with other modern doo-hickeys like built-in GPS and the backup cameras found on so many cars these days, Mercedes-Benz just might have a little something on its competition other than a fancy German badge.