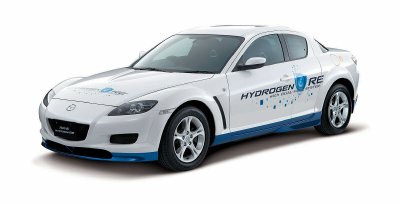 Mazda has made it official: It will begin providing hydrogen-equipped vehicles to two of its biggest customers. Iwatani International and Idemitsu Kosan have each leased one of the RX-8 RE, a dual-fuel car that allows switching from gasoline to hydrogen with the flick of a switch.

The two vehicles will be delivered next month, and Mazda hopes to have eight more ready for similar specific “tryouts” by the end of the year.

The RX-8, according to Mazda, emits no carbon dioxide gas and only trace amounts of nitrogen oxide when running on hydrogen fuel. And the dual-fuel model enables drivers to use both forward-looking and existing technologies in a practical and meaningful way.

The vehicle is more than two years in the making, since its introduction as a real-world concept in late 2004. It is perhaps another year or two away from being readily available for the masses; yet it represents a significant step forward in the evolution of automobiles away from dependence on one source of fuel.