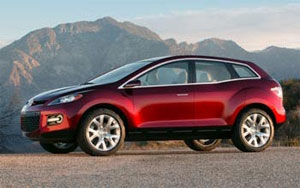 Mazda Motor Corporation has just started the production of its new SUV model that would be distributed in North America.

The Mazda CX-7 crossover SUV’s dashing frame and design can comfortably seat up to five persons. It’s not just all looks either as its sporty architecture is backed by a 2.3-liter direct injection gasoline engine that has four cylinders. The intercooled and turbocharged engine could put out 244 of horsepower.

Other car functions and features are automatic such as its locks, mirrors, and windows. The CX-7 also has features cruise control and alloy wheels that measure 18 inches (and all four of them have vented disc brakes).

The new SUVs would be distributed to Mazda’s North American vendors by spring of this year. The Mazda North American Operations has over 700 dealers all over the United States. The CX-7 model would be made at the car company’s Ujina Plant No. 2 in Japan and will be priced at $23,750 for the front-wheel drive Sport type.