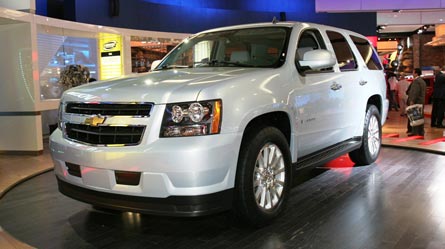 If you thought hybrid cars had to be small and gutless, think again. With the recent launch of the Toyota Highlander Hybrid and the Ford Escape Hybrid, we’ve seen that SUVs can be a little more environmentally friendly as well. However, it has never been attempted in a full-size truck, that is, until now with the Chevrolet Tahoe Hybrid set to hit dealerships near the end of 2007 as a 2008 model.

The system mates an electric motor/generator with a Vortec V-8 OHV gasoline engine, producing a more than adequate 300 horsepower. The truck can run off of the electric motor alone, the gas engine alone, or a combination of the two. It can even accelerate without the need for gasoline. The technology is the result of collaboration between GM, DaimlerChrysler, and BMW.

They say that this solution will result in a 25% fuel savings compared to the regular Tahoe, and the gasoline/electric powertrain will also be implemented into the luxury Cadillac Escalade. Other features include a slightly lower ride height, low rolling resistance tires, and a liftgate and hood made of aluminium.