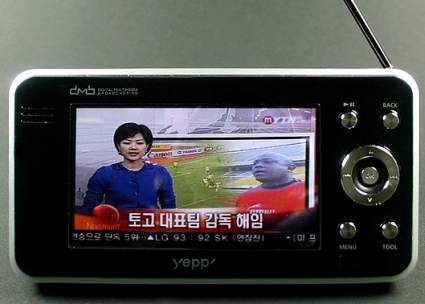 There were murmurs last September about a PMP from Samsung that would also feature DMB capabilities among a bunch of other drool-worthy features. Now the words on your computer screen have become just a bit more real, because pictures of the YM-PD1 have surfaced on the interweb.

This is one handsome looking personal media player, sporting a good sized 4-inch screen, on which you can not only watch a huge variety of video files – including MPEG4, WMV, AVI, Divx, and Xvid formats – but also DVD-quality satellite television thanks to its DMB (Digital Media Broadcasting) functionality.

Coming in 20GB and 30GB varieties, the YM-PD1 will swallow up your SD cards if the internal storage isn’t enough. Apart from video, you can also jam away to your favourite tunes, again taking a wide range of formats, including MP3, OGG, ASF, WMA, and Secure WMA. If that’s still not enough, you can listen to and record FM radio as well. Word is there’s even a camera on this thing that, unfortunately, looks like yet another Korea-only release.