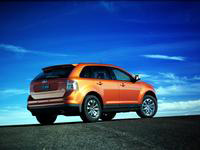 Ford will be the first automaker to produce hybrids in Canada, the company announced on Wednesday.

The target date is 2010, this is when volume production of near-zero emission high-fuel economy vehicles like the Ford Edge and the Lincoln MKX. The Oakville Assembly Complex of Ford of Canada will be the main facility for this manufacturing.

These two models are so-called CUVs, or crossover utility vehicles. They will begin to be manufactured in earnest later this year, with full hybrid production expected to be initiated by 2010.

“Hybrids will put Ford at the forefront of vehicle assembly innovation in Canada, forever changing the landscape by producing vehicles that significantly reduce smog-forming emissions and are extremely fuel efficient,” said Bill Osborne, president and CEO, Ford of Canada.

Among the features planned for the hybrid CUVs are an electric drive that can take the place of oil-petrol fuel, an engine stop-start that automatically shuts off the engine after a certain period of inactivity, and regenerative braking, which harnesses energy that wouldn’t be used otherwise.