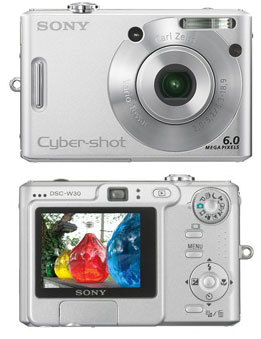 The CyberShot DCS-W50 and DCS-W30 both feature eye-level viewfinders, reminiscent of non-digital cameras. But despite the improvement made on the viewfinder, both models still sport a large display. The DCS-W50 has a 2.5-inch LCD, while the DCS-W30 features a smaller 2-inch screen.

The display size did not affect the slim design of the cameras though. In fact, the DCS-W50 and DCS-W30 are more compact than their predecessors. Memory size is at 32MB, with an option to expand it further via an optional Memory Stick Duo or Memory Stick Pro Duo.

Both models ensure precise picture detail and clarity with its 6 megapixel resolution and Carl Zeiss Vario-Tessar 3x optical zoom lenses. Video clips could also be conveniently made on MPEG1 format.

The most distinctive feature that both models have compared to other DSCs is its ability to utilize different lighting conditions to produce vivid photos. And with Sony’s Clear Raw Technology, users are able to shoot at faster shutter speeds to capture moving objects with no blurry effect or too much image noise.

Both models also feature an innovative and user-friendly menu system. Once an option is selected, text would pop up which provides information as to the selection that has been made.