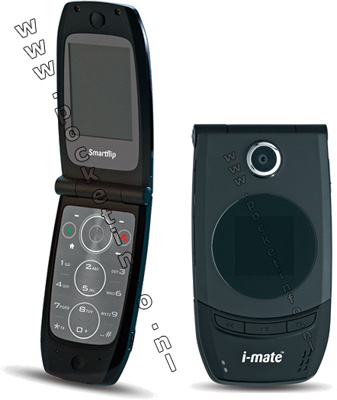 HTC is in the news again, but as is usually the case, the company’s branding is not visible on any product shots. Last year, everyone spotted pictures of the HTC Star Trek and now the super thin clamshell is on the cusp on coming to fruition, rebadged as the i-mate Smartflip. To be unveiled this week at 3GSM in Barcelona, the Smartflip is said to be as thin as Motorola’s popular RAZR line of handsets. Even the flat silver keypad seems to have some Moto influence to it, but it seems like the Smartflip has got a couple of legs up – so to speak – on its RAZR kindred.

For one thing, this smartphone will be sporting Windows Mobile 5.0, probably complete with a full suite of Microsoft applications for the office geek on the go. Connectivity comes in the way of quad-band GSM/GPRS, as well as Bluetooth and high-speed EDGE. Last time we saw this thing, it had a 2.0MP digital camera with flash, 64MB of RAM, 128MB of ROM, and a microSD expansion slot.

It’s too bad they didn’t keep the Star Trek name for this communicator, but I guess there might be a few trademark issues involved. Look for more HTC handsets – like the Hermes – to be unveiled at 3GSM, likely re-branded under some other company’s name.