Nokia is making quite a splash in Barcelona already, unveiling all sorts of new devices at the 3GSM World Congress.

Among the highlights so far are three new phones, one of which can work with the Finnish company’s first UMA network solution. That would be the 6136, which is manufactured specifically to be able to go from GSM to WLAN without hassles or loss in signal or functionality. The flipster is designed to take full advantage of the company’s first UMA network solution. The result is a start-to-finish UMA experience.

“We strongly believe that the technological developments announced here today will provide the basis for a future of faster, easier and more cost-effective mobile telephony services,” said Nokia Chairman and CEO Jorma Ollila.

The other two phones unveiled were the 6131, a GSM camera phones that folds up and offers a 1.3 megapixel camera, and the 6070 candy bar, another mid-range GSM phone that is a lower-range camera offering in a traditional form at a lower price.

Ollila, speaking in his keynote address, also announced sales targets for 2006 (including a prediction of 40 million 3G/WCDMA devices and another of 150 million devices with an integrated FM radio), more details on a multivendor platform collaboration with Vodafone, and a partnership with Sony Ericsson to pursue compatibility with DVB-H devices. 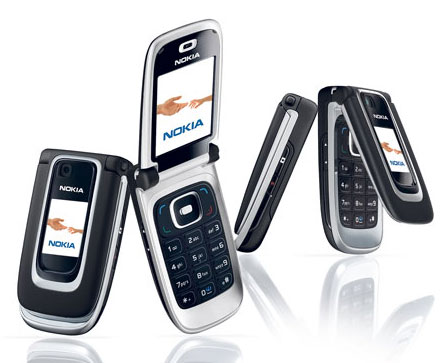