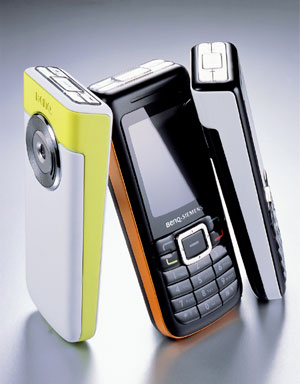 The Venus, Hermes, Cupid, and Ulysses units will be on display at the 3GSM World Congress in Barcelona. BenQ has not yet released a detailed description of the mobile handsets. However, it is expected that they would release an extensive description of the products by next week at its official launch.

The Venus C3 is a phone for the music enthusiast. It has specific buttons for MP3 operation on its front casing. The unit also doubles as an FM radio and sports a compact and trendy clamshell architecture.

The Ulysses B1 is a 3G handset that has a smooth and classy body that incorporates style and diverse functionality. It is lighter and more compact than the other models in its class. This unit is for the user who want a versatile phone that could perform various functions, while keeping a sleek image at the same time.

The Hermes B has the most attractive design among the three. Though it is a music-lover’s phone, it is only capable of performing basic music-playing functions unlike the Venus C3.

The Cupid is an ideal unit for businessmen and executives. It has a sleek casing and features a slide phone architecture.