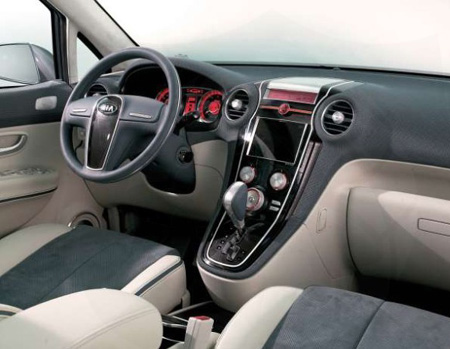 You may think of Kia just for their annoying commercials with the guy in the swamp, but they’ve taken an interesting step with their latest concept car. They’ve added a USB port. Two, actually. Their Multi-S concept looks a lot like a BMW X3. It will be the first car to have a USB port in the center console and the latest technology to support interface between the cars audio system and your iPod, MP3 player, PDA, phone, computer or whatever else. You can transfer music and media, play content and charge devices. A rear entertainment system will also sport a USB port.

Another Kia concept, the Soul, is further away from production, but it takes things a step further. It comes with a notebook computer that is stored in the glove compartment until you need it, when you can fold it out on its own swing tray. The car will include Bluetooth and MP3 technology and will feature multiple USB ports, WiFi and Telematics. The notebook’s screen is joined by fold-down airplane style screens for passenger viewing.