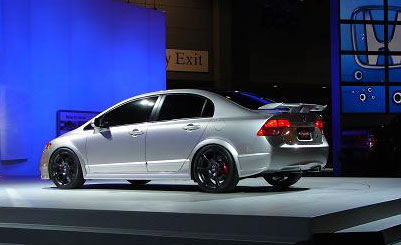 If you’re loyal to your sporty little Honda Civic Si, but need a more practical solution because of your family, Honda has unveiled just the ride for you. At the Chicago Auto Show yesterday Honda took the cover off of a new 4 door Civic Si. It is the first time that Honda has put four doors in the Civic Si and the first time that they will offer two choices of body types for the coupe.

Though it will look quite different on the outside, the car will be identical under the hood to its two-door brother. It will have the same 4 cylinder engine with 197 horsepower, a six speed manual transmission and Brembo brakes. It has a wing on the back of the car, but it’s unclear whether that will be standard on the production model. The car could use a bit more horsepower, but it will be good fun for $20,000 or so.