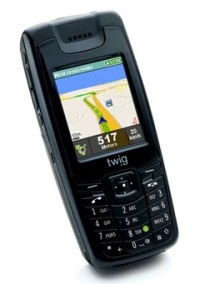 Soon you won’t need to call your buddies to figure out where to go, because Benefon is announcing a mobile phone with a fully integrated GPS system. In co-operation with NAVTEQ, the industry leader in global positioning technology, Benefon has developed the TWIG Discovery.

Not only will you get your standard set of maps and what-not, but you’ll also get turn by turn navigation, street level details with Points of Interest, and voice instructions. If you’re into the flashier looking graphics, the system will even do 3D map rendering. That said, you can still rest assured that the 2-dimensional option is also available. For the more adventurous, Benefon has even included what it calls “TWIG Finder”, allowing users to find other TWIG owners.

On the design front, it seems that they’re going for the run-of-the-mill candybar for now. No more details have been released just yet, but expect much more information about these GPS-enabled handsets at the upcoming 3GSM World Congress in Barcelona.