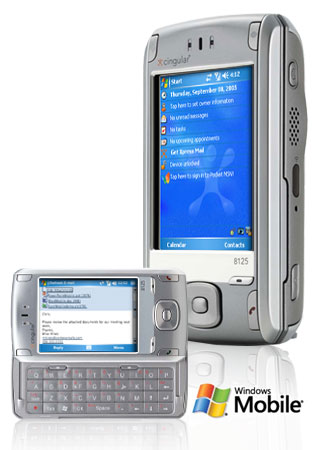 Following the success of the hugely popular Cingular 2125, the mobile service provider is rolling out a couple more re-badged HTC smartphones to its lineup. Based on the HTC Wizard, the Cingular 8125 and 8100 do the quad-band worldphone dance, while at the same time shooting data your way via Wi-Fi (802.11b), Bluetooth, and EDGE.

Emailing, word processing, and text messaging couldn’t be easier with the slide-out QWERTY keyboard. As expected, these latest PDA phones run on Windows Mobile 5.0, so you’ll have access to a full suite of Microsoft productivity tools, including Word, PowerPoint, Outlook and Excel, as well as Windows Media Player 10. If the 64MB SDRAM and 128MB of flash ROM isn’t enough to handle all your AAC, WMA, MP3, AMR, WAV and MPEG4 media, rest assured that there is a mini-SD expansion slot there for you.

The only difference between the 8125 and 8100 is that the former sports a 1.3 megapixel camera, whereas the latter is camera-less. Look for prices to start at around $300 range.