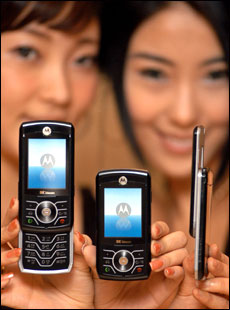 Remember a little while back when we reported a RAZR clone in China that was a slider? Well, looks like Motorola really was working on a sliding version of its popular thin phone and it is on the cusp of releasing it to the public. Seeing how they already have a thin flip (RAZR) and candybar (SLVR), it only makes sense that they complete the collection with a slider, though they decided to name it the RAZR Z rather than a more appropriate name like SLDR.

The phone itself will have much the same features as its other slim cousins, including a 1.3 megapixel digital camera and MP3 playback, and of course it’s incredibly thin at a mere 14.8 millimeters. The 2.2-inch color display is adequate and is on par with any comparable phone on the market.