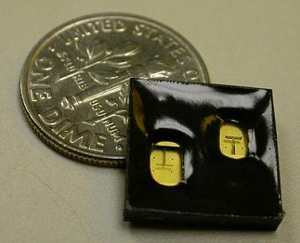 IBM on Tuesday introduced what many are touting as a breakthrough chipset, a bipolar CMOS production made of silicon germanium and measuring just 14 mm in length. Remarkably, the chip can exchange data at 60 GHz, since it has both receiving and transmitting antennae.

In plain language, this means that a chip the size of a dime can serve as a wireless network facilitator of sorts. Indeed, Big Blue is calling it the Wireless Personal Area Network (WPAN) chip.

But we’re not talking Wi-Fi here. Rather, the goal, according to IBM, is a further elimination of cables.

“That’s what the consumer electronics folks are trying to target, putting out a wireless system that can throw those cables away, get rid of that, once you’ve [shelled out] $5,000 for the TV, the $100 cable set will look ridiculous,” said Brian Gaucher, research manager for IBM Research. “So they’re trying to integrate all that stuff into a single solution.”

Coming on the heels of a recent announcement of a wireless hi-def chip, this latest offering furthers IBM’s reputation as a leader in the race to exploit 802.1 technology for all it’s worth. And one technology that continues to be absent is the eponymous Bluetooth, widely considered to be the industry standard for many things electronic these days. IBM officials, Gaucher included, think that they have zoomed right past Bluetooth. Indeed, the 60 GHZ chip has been said by some to be “Bluetooth on steroids.” Speed is of the essence.