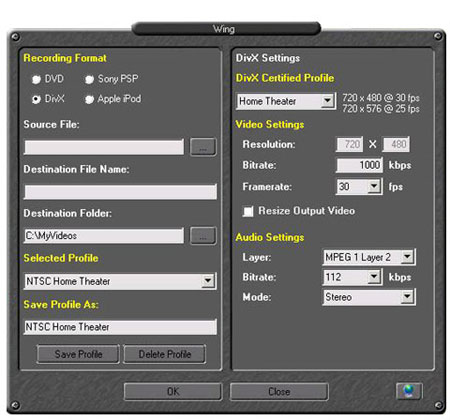 Hauppauge has just released their software solution called Wing that enables you to record TV shows on your PC and later on transfer the clips to your portable video player. Wing’s capability is not just limited to capturing live TV programs. It can also transform previous recordings to file formats recognized by portable players such as the Sony PSP and the Apple iPod.

The application functions by just a click of a button. Video playback is not just limited on the PSP or iPod as the recording could also be viewed on a PC or Television.

Wing allows automatic recording of TV programs by having a plug-in feature for the widely-used electronic program catalog, TitanTV. Another plug-in for the company’s WinTV Scheduler allows the user to personally set the time and date of the recording. MPEG-2 clips could also be converted into any of the file formats recognized by Wing through an off-line recorder.

The software records in MPEG-4, H.264, and DivX file formats for video devices. Wing’s support for a wide array of file platforms ensures that the recording would work on any portable video player. These formats could be changed to give the user the capability to alter video quality and size. Recordings could also be made directly to a DVD disk.

Wing is compatible with many of Hauppauge’s TV tuners. It is a good accompaniment to the firm’s WinTV-PVR and HVR personal video recorders. The application costs $24.95 and is available at selected UK stores or at the company’s website, www.hauppauge.com/wing.