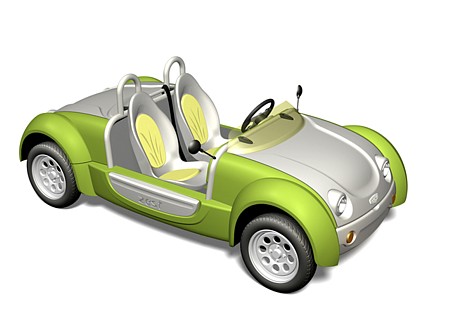 Ever wanted to live in a cartoon? then you’ll want to get the new Zest microcar, this thing looks like it is right out of some cartoon world. A French consortium will be unveiling a preproduction model of this little wonder at the Geneva Motor Show. The molded thermoplastic body is completely symmetrical, meaning that the hood looks the same as the trunk. It doesn’t come with a top, but a hardtop is available as an option.

Though it looks like a car, it is actually licensed as a quadricycle. That makes it easier to get licensed and makes the standards it has to meet lower. Once you feel the power of the engine you will realize how unlike a car it is. It has a 505 cc two cylinder engine that can harnesses a whopping 21 horsepower. It definitely won’t jump off the line, but Macpherson struts will keep it smooth and four-wheel disc brakes will stop you with ease.

The makers are planning to ship 600 units this year and up that to 2,000 next year. They will be sold in Europe and should save you some big bucks on petro.