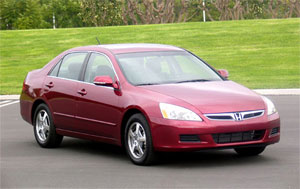 Honda is charging more for their 2006 Accord Hybrid than they did last year. The base MSRP of $31,540 is $850 more than 2005. What do you get for the extra money? Lower mileage. That doesn’t sound like a very good deal. The car offered 29 miles per gallon in the city and 37 mpg on the highway last year. This year you only get 25 mpg in the city and 34 mpg out on the highway. According to Honda, part of this difference is due to a new standard moonroof and temporary spare tire that have added 88 pounds to the weight of the car and moved it into a new EPA weight class. To put it in to more accurate light, this means that the new numbers are more realistically attainable than last years numbers.

The car comes with the same 3.0L, V6 engine, but the horsepower has joined the mileage in decreasing, from 255 to 253 in this case. This is due to Honda’s voluntary adoption of the new Society of Automotive Engineer’s ratings specifications. The performance of the engine is reportedly unchanged.