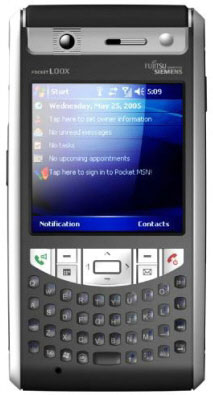 Fujitsu-Siemens is looking over at mainland China for the manufacture of their latest 3G-enabled smartphones. Although nothing official has been announced, it is known that the Loox T810 and T830 will be manufactured by Compal Communications. Motorola recently worked with Compal in its development of the MPx PDA phone, so Fujitsu-Siemens enthusiasts can have some assurance that the team behind the Loox T810 and T830 know what they’re doing.

The T810 and T830 will be designed as direct competition to the HTC Universal made by High Tech Computer, and most recently the Sony Ericsson M600. The operating system will likely be the popular Windows Mobile 5.0, and the devices will probably feature a suite of Microsoft applications. Sporting both GPRS and WCDMA capabilities, the T810 and T30 will be powered by an Intel Bulverde XScale PXA 270 processor. Bluetooth, Wi-Fi (802.11b/g), GPS, and a square 240×240 display are among its other features.

Look for official announcements over the next few weeks confirming this deal, likely at the upcoming 3GSM show in Barcelona.