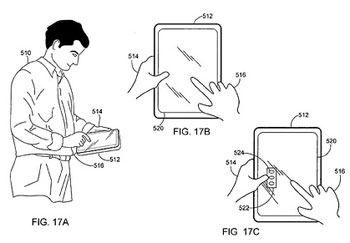 Apple is moving closer towards a personal computing era where mice and keyboards will no longer be needed.

In preparation for the release of a touchpad or touchscreen-driven device, a Mac OSX tablet edition if I may, Apple has applied for several patents covering the method for interpreting certain hand and finger motions (gestures for touch sensitive input devices). These specific movements or gestures would have a distinct effect on the application or on the GUI running on the device. For example, in order to zoom on a particular item on the screen, the user should simply perform a pinching action or gesture above that item.

Accessing control panels has also been made easy. Certain gestures have been programmed to result in the appearance or popping up of controls. Data input can also be made directly on the screen through a virtual keyboard. Other commands and instructions could also be made by performing a pre-determined gesture.

Another feature that Apple wants patented is the enlargement or highlighting of items on the GUI when an object or finger passes over them. Dragging the magnified item would also be possible by performing a specific gesture.

A patent for a music-mixing panel is also being applied by Apple. Sound could be altered by accessing mixing controls over the screen. The screen and the GUI would also be designed to recognize simultaneous user inputs on the display.