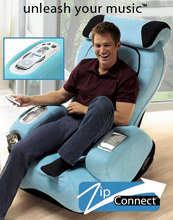 The iPod is as red-hot as ever. This is especially true in the accessories business.

Recent figures have put the iPod add-on market at US$1 billion a year. According to a survey by the NPD Group, for every $3 spent on an iPod, $1 is spent on an accessory.

Industry reports continue to list Apple’s portable music player as the dominant force in the market, with as much as a 75-percent share. And for every iPod sold, at least one or two accessories are sold as well.

Many of those accessories are perceived as rivaling the iPod itself in “coolness.” And all of those accessories together add up to one giant shopping spree in “cool.” Whether Apple’s rival like it or not, Belkin, Kensington, and other accessory manufacturers aren’t clamoring over one another to make products that go with the Toshiba MP3 player.

Among the accessories are such mundane things as docks, speakers, and chargers. Manufacturers also make innovative products such as a baby stroller, a belt buckle, and a massage chair—all specially designed with an iPod slot. You can even get FM radio on your iPod now.

Understandably, Apple is pleased. “For us it’s great because the decision to buy an iPod is reinforced when consumers see all the accessories,” said Greg Joswiak, Apple’s vice president for worldwide iPod marketing.

The key seems to have been that Apple has encouraged these outside manufacturers to compete with each other in producing both simple and outlandish accessories. Kensington, in particular, is an example of a company that has flourished in the iPod’s wake. A total of 20 percent of its sales are currently taken by iPod accessories.

“Most of us were caught a little bit by surprise by the growth trajectory,” admitted Rob Humphrey, director of marketing for Kensington. “I’ve never seen anything like it in my career.”

Apple has now joined the fray, promising to produce a series of products with the “Made for iPod” logo. Industry experts see this development as just another log on a fire that continues to grow.