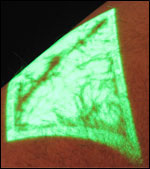 With all the controversy about RFID, it probably comes as no surprise that researchers are working on alternatives. One such alternative involves palm reading, blood cells, and veins.

The brainchild of a Memphis, Tenn., biotech company named Luminetx, their technology implements an infrared scan of the blood cells that run through a person’s veins. The data is analyzed by a computer. The result is a powerfully individual data set.

“Our vein structures are completely different, especially when you look at the palm,” said Luminetx Chief Executive Officer Jim Phillips. “In a way, it’s like looking at a bar code. We convert your veins to a bar code.”

The company invented the process, naturally enough, to help medical professionals find veins in patients who needed injections. But sensing an opportunity, Luminetx is now marketing the technology to financial institutions and homeland security officials as an alternative to other, more controversial biometric identification tools.

Some industry observers, at least, are excited about the development, for which Luminetx received a patent last fall.

“The future of our country’s security is dependent upon companies like Luminetx who are on the cutting edge of identification technology,” said Phil Trenary, CEO of Pinnacle Airlines, Inc. “Increased need has in turn created increased demand for high-tech ids that can’t be copied or forged. I’m personally very excited about what Luminetx is working on.”

Fujitsu is already working in this area and has sold thousands of similar units in Japan. That country, however, doesn’t seem to have the kind of privacy debate that the U.S. has.