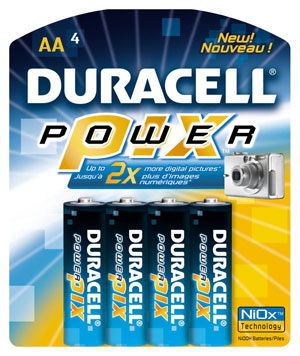 I don’t know about you, but I thought that most people in the market for digital cameras use those that come with rechargeable lithium-ion units, or even if your cam takes standard AA or AAAs, you’d opt for the NiMH variety, would you not?

I guess when you’re traveling, you might not have as much access to a wall plug as you would like, and ensuring you have enough juice for that perfect shot is important. It is with that in mind that Duracell has now launched its new line of PowerPix batteries based on a Nickel Oxy Hydroxide formulation.

Panasonic (Oxyride) and Energizer (Lithium) already have long life disposable batteries on the market, and so does Duracell (M3 Ultra alkaline). But they say that these NiOx cells provide “significantly longer-lasting battery performance”, especially for the high draws associated with digital camera flash functions.

No exact figures have been released, so we’ll just have to wait until someone gets their hands on the new PowerPix batteries later this month before we know for sure just how much better NiOx is than regular ol’ alkalines. A four pack of AA will sell for about US $5.99.