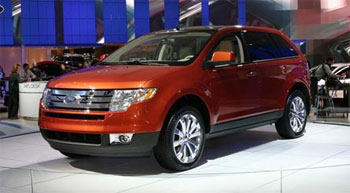 Following up on the relative success of the Freestyle, Ford is cashing in on the crossover SUV market with another offering, the Ford Edge. Based on the Mazda 6 sedan, this new vehicle puts out an adequate 250 horsepower from the 3.5-liter V6 that it shares with cousins the Ford Fusion, Mercury Milan, and Lincoln Zephyr, all of which can trace their heritage back to the Mazda 6.

The appeal of a crossover vehicle is that it gives the height and look of an SUV, providing improved road vision and perceived safety, while at the same time avoiding the pitfalls of the tendency for sport utilities to guzzle the petrol. Ford says that the Edge will offer fuel economy among the best in its class, and the fully independent suspension will provide exceptional handling characteristics.

Add-ons include panoramic roofs and satellite navigation. Look for the Edge to hit American roads later this year.