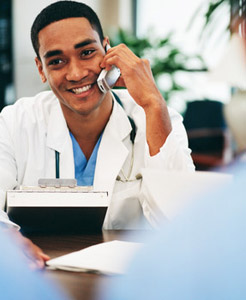 A recent study by the Yale School of Medicine has concluded that the use of mobile communication devices in hospitals is a huge benefit to medical care and a minimal source of electromagnetic interference.

The study, which pooled responses from 4,018 anesthesioligists, found that 65 percent of those surveyed used the pager and that 17 percent used the mobile phone as their primary mode of communications. That adds up to a huge majority of doctors using mobile communication, which they save reduces their error rate and improves the overall medical care they can give their patients.

One concern with using mobile phones and pagers has been the electromagnetic field that such devices create around themselves when they are in use and how that field might interfere with the function of medical machines. But Keith Ruskin, M.D., associate professor in the Departments of Anesthesiology and Neurosurgery and the senior author of the study, says that improvement in cellular technology have vastly reduced that danger.

“The new digital cell phones used much higher power and operate at a different frequency,” Ruskin said. “The small risks of electromagnetic interference between mobile telephones and medical devices should be weighed against the potential benefits of improved communication.”