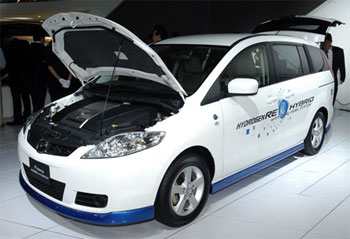 Building enviro-friendly vehicles has become a major component to many automakers’ strategies, and now Mazda is working on a couple of hybrid vehicles of its own. However, unlike the others on the market with gas-electric engines, Mazda has opted for a hydrogen-gasoline option. The company is working on implementing a rotary-powered hybrid unit into its Mazda 5.

The same technology has already been developed for a gas/hydrogen-powered rotary RX-8, which will hit the mountain passes of Japan some time this year, but the hydrogen tank effectively eliminates the sports car’s trunk. But with the Mazda 5, there’s plenty of space after removing the third row of seating.

This is the first time that the bi-fuel, two-rotor hydrogen RENESIS engine has been used in a front-wheel-drive application. Users can easily switch between hydrogen and gasoline fuel with the simple touch of a button on the dash. The Mazda 5 Hydrogen Rotary Hybrid Concept is on display at this year’s Detroit Auto Show.