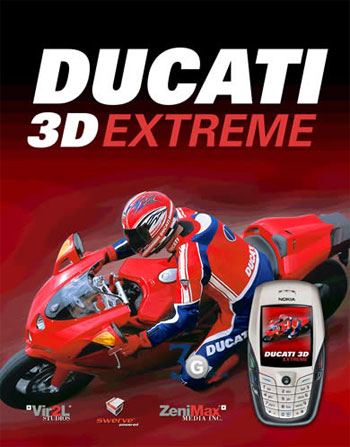 As much as I would like to ride one, I couldn’t afford to buy myself a Ducati motorcycle. Well now I don’t need to, thanks to Vir2L Studios and Superscape Group. Now all I need is a 3G phone. That’s because the two companies have released Ducati 3DExtreme, a 3D motorcycle racing game for 3G phones.

The game is a giant step forward from the Ducati Extreme game released by Vir2L in 2004. It uses an advanced 3D engine to make you feel like you are right on the bike. You get to choose from several models, each of which has realistic characteristics of the actual Ducati model. As you progress through the four tours you are able to customize and modify your ride. You can even make wagers on the race outcomes and use the winnings to ‘supe’ up your bike.