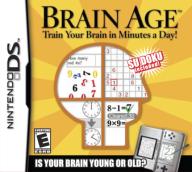 Nintendo is at it again. The company that has entertained our senses for several years has now decided to focus on the organ that matters the most – the brain.

“Brain Age: Train Your Brain in Minutes a Day” is the latest entertainment program for the Nintendo DS unit.
It has mind-stimulating drills and exercises that are suitable for any age. Although the game was first a hit with adults, it is gaining popularity and support from very young audiences now as well.

The program is called Brain Training in Japan. It is a hit in the country with three titles released already. Each of the titles has managed to post over 1 million copies, with the latest title achieving this distinction in just less than a month of its release.

Brain Age is based on the works of famous Japanese neuroscientist Professor Ryuta Kawashima. The mental exercises mainly consist of number and word games aimed at stimulating the brain. Participating in the exercises is as simple as writing on a piece of paper since the Nintendo DS lets its users write their answers directly on the touch screen display.

Big Brain Academy is the second offering in the Brain Age series. (It is known as Brain Flex in Japan.) This title allows up to eight players to participate and compete in 15 mental drills.