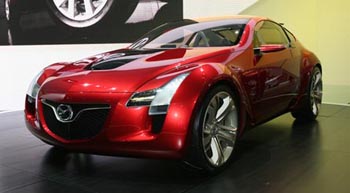 The Detroit Auto Show this year, as with every one that preceded it, is filled with some crazy looking concept vehicles. Mazda is exhibiting an aggressive looking coupe with some definite West Coast flavour. The Kabura, Japanese for “first arrow shot into battle”, was dreamed up under the supervision of Franz von Holzhausen, the director of design at Mazda North American Operations, the same man responsible for the Pontiac Solstice and Saturn Sky.

The oversized 19- and 20-inch wheels may be one of the first things to catch your eye, but the thing that sets this coupe apart from its nearest competitors is a unique three-plus-one seating arrangement. The conventional glove box and dashboard are nowhere to be found, making room for one extra spot in the back behind the passenger seat. The offset seating may be a little off-putting at first.

Designed to be an inexpensive entry into the coupe market, the Kabura is clearly marketed at the younger “tuner” set. According to von Holzhausen, “it is still very much a concept, but one for which we have done our homework.” The MX-5 based Kabura will sport a 2.0-L DOHC I4 engine, putting out an impressive 190-hp. Later renditions may include the company’s signature rotary system, but only time will tell. 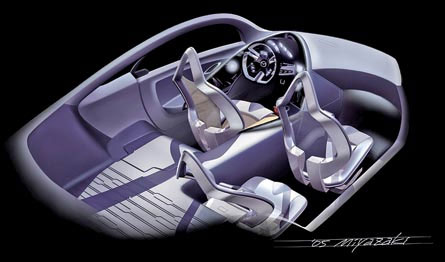