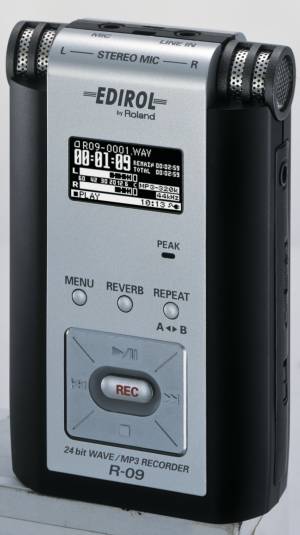 We all know that the built-in mic on most MP3 players is pretty much useless other than for personal voice recordings, and so to capture high-quality audio, you need to turn to some other device. Up until now, the only real option has been M-Audio’s MicroTrack, but now there’s an alternative that’s cheaper and just as good.

The new R-09 unveiled by Edirol may look like something you need to get rid of your five o’clock shadow, but delve a little deeper and discover a device that’ll do high-quality audio recording. Its predecessor, the CF-based R-1, was too beefy for most users, and thus with the new R-09, Edirol opted for a more iPod-sized gadget. In line with going smaller, the R-1 will take SD cards, but, strangely, takes AA batteries. The file formats used are uncompressed linear WAV and MP3.

Coming this Spring, the Edirol R-09 comes with a reverse-colored LCD, a stereo electret microphone, and dedicated input control. Although MSRP places it at the $450 range, you should be able to grab one for around $400.