Toyota might have the Highlander hybrid, and Ford has its Escape hybrid, but when BMW enters into the hybrid SUV market, you can be sure they will be a force to be reckoned with. The German automobile manufacturer has taken its compact X3, and has mated the sport utility with what it calls “EfficientDynamics”.

The concept vehicle was showed off at the Detroit Auto Show. BMW’s take on hybrid makes use of “Super Caps”, or high performance capacitors that store and supply the electric energy to the “Active Transmission”. The electric motor is mated with a standard issue six-speed automatic gearbox and BMW’s straight-six direct injection gasoline engine.

Look for an impressive 440 lb-ft of torque, 295 of which comes from the electric motor. The version exhibited at the show will not make it to production, however, as BMW chairman Dr. Helmut Panke commented, but it does “provide a preview of possible future developments.” This EfficientDynamics system is said to produce 20% better fuel economy. 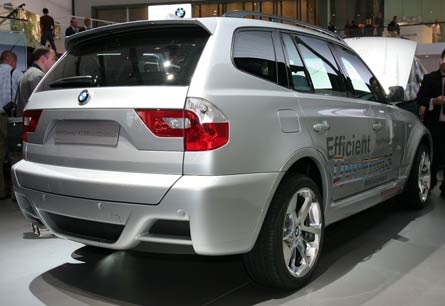