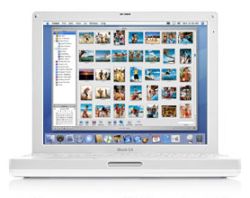 As if being Yonah chipset-powered wasn’t enough to get our juices flowing, word on the street is that the new Apple iBook is going to also feature Front Row. The new 13-inch notebook will probably come in the standard issue glossy white, though with the direction the company is currently heading, I wouldn’t be surprised if a glossy black version also hit the market.

The new iBook is said to also have a built-in iSight camera and will include the Apple remote. All the other specifications will be up to par for an entry-level Mac, so don’t expect the feature list to wow you. For example, the processor is likely going to be of the 1.67 GHz Core Solo variety.

But hey, at a price point of less than $1000, you can grab a sleekly designed portable computer complete with Yonah-power, Front Row and iSight. No word on availability just yet.