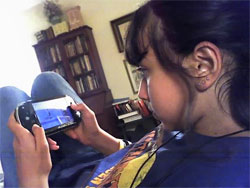 A new survey suggests that video games can be a form of bonding between parents and children. The survey, released on Thursday by the Entertainment Software Assocation, found that more than a third of American parents play computer and video games themselves and that of those, 80 percent play those games with their children.

The video game business is a massive one, with more than 228 million games sold in the U.S. in 2005, nearly two games for every household in the country. Sales grew to US$7 billion last year, a 4-percent increase.

One eyebrow-raising figure to come out of the study is that although children play video games at home on average of 9.1 hours a month, their parents play video games 19 hours a month. Another possibly surprising find was that 47 percent of the parents who were playing all these video games were women. (A common perception is that men dominate the video game numbers.) Many parents contacted by the study, which had a sample of 501 parents who have children between the ages of 2 and 17 at home, said that their video game play was a result of habits when they themselves were children.

The study, conducted by Peter D. Hart Research Associates, found that the most frequently played type of game was cards, with 34 percent. Puzzles and games were next, with 26 percent, followed by sports at 25 percent and action and strategy games at 20 percent. Downloadable games made up the last category, with 18 percent.