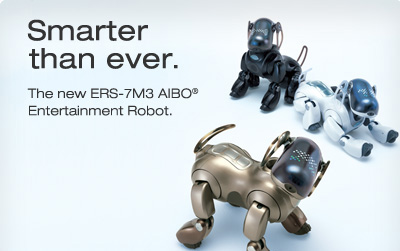 Sony has shut down production of its robotics unit, leaving Aibo and Qrio out in the cold. The mechanical dog and humanoid will be consigned to the scrap heap (or an eBay seller near you).

Aibo, the robotic dog that emerged from the Sony kennels to great fanfare in 1999, was just costing the company too much money, a Sony spokesman said. The total number of dogs sold is slightly more than 150,000, which is a paltry total compared to what company officials had predicated and hoped for. The US$2,000 price tag undoubtedly played a large part in the lackluster sales, which have left the poor little pooch in the market forces doghouse. Still, collectors and aficionados will miss the regular updates of little Aibo, whose most incarnation had the power to speak 1,000 words, react to an owner’s commands and motions, and even play music.

One thing that Aibo can do, of course, is take pictures. That functionality has spawned a cottage industry of online photo-swapping, with Aibo-taken pictures as the prime commodity. These and other fans of Aibo might have a bone to pick with Sony over the shuttering of the robotic facilities. Sony, however, wants to keep an eye on the bottom line.

“Our core businesses are electronics, games and entertainment, but the focus is going to be on profitability and strategic growth,” said Sony spokeswoman Kirstie Pfeifer. “In light of that, we’ve decided to cancel the Aibo line.”

This does not mean that you can’t get one of these little dogs if you really want one. Sony has said that it will continue to provide Aibo to anyone who wants to buy one. Once existing inventory is gone, however, it’s gone for good.

Qrio, a humanoid friend to Aibo, will be discontinued as well, with the same existing-inventory arrangements.