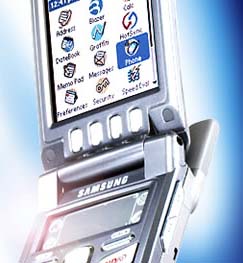 Samsung says they have solved the vexing problem of reading a mobile phone LCD in bright sunlight. The Seoul company announced on Thursday the development of a 1.72-inch super-reflective LCD with a super-high reflectance rate, equal to three times that of existing mobile displays.

The advancement is a combination of an improvement in the light-concentration rate, the use of transflective rather than transmissive panel technolgoy, and the use of silver instead of aluminum. Light is now concentrated into pixels at a higher rate than ever before. The screen is illuminated from the front and the back, not just from behind. And the choice of silver results in a brightness of 100nit, a contrast ratio of 220:1/30:1, and a 50 percent color saturation.

Samsung officials were obviously pleased with their announcement of the Super Reflective (SR) technology.

“Our new super-reflectance technology allows us to offer consumers a high-quality LCD that is very easy to read in bright sunlight,” said Executive Vice President Jin-hyuk Yun of the Mobile Display Business Team at Samsung Electronics LCD Business. “The SR technology has improved the reflecting metal, the color filter and other parts of the assembled LCD module, in addition to the lens and reflectance rate, without increasing production costs or lowering yields.”

The company said that it would apply the new technology to all of its high-resolution transflective displays in the future.