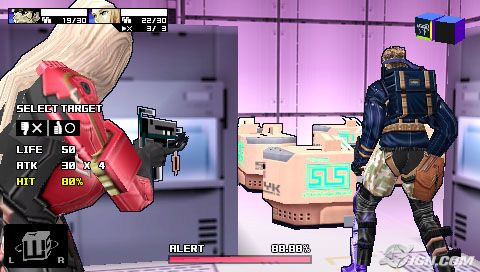 Console veterans of Metal Gear Solid might find themselves in some rather unfamiliar territory when picking up Metal Gear Acid 2 for the PlayStation Portable (PSP). Immediately, the hyperactive cell-shaded graphics are quite a different look than the ultra-realistic look of the PS2 counterpart. Moreover, a card-based strategic scheme defines much of the game play.

If you’ve played the first Metal Gear Acid, you’ll be happy to hear that this second version is more action-based and offers substantially more freedom. The interface is intuitive and easy to understand as you battle through what looks like a moving comic book. Konami reps are proud that MGA2 is “exponentially better” than their first portable offering.

If you were disappointed with the portable 3D of Nintendo’s Virtual Boy, you are not alone. Sony has decided to re-invent the idea with the Solid Eye peripheral that will ship with MGA2, giving gamers the illusion of full 3D graphics. Expect Snake to re-introduce himself at the end of March.