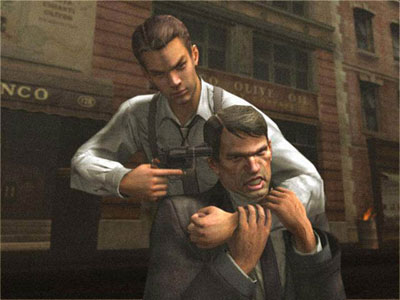 Leave the gun, take the cannoli. Electronic Arts (EA) and Paramount Pictures are set to launch the video game version of the classic Godfather film starring Marlon Brando and Al Pacino. You can take the personality of a Corleone, and take the family with you on the road via the PlayStation Portable (PSP). Other versions of the game will also be available on the PlayStation 2, Xbox, PC, and Xbox 360.

You won’t be the Godfather right off the bat, as you start out as a young man new to the world of the Corleone criminal syndicate. Expect a “create-a-gangster” option to start before you enter New York City of the 1940s. Work your way through the ranks and interact with such famous (or rather, infamous) figures as Tom Hagan, Sonny, and Don Vito Corleone.

Executive Producer David DeMartini sought to “build a complex and responsive open-world that puts you in the heart of the action. The deeper you are into the experience the better the game gets.” You can be sure the violence of the mob will be there in all its glory as The Godfather: The Game is rated M for Mature.