Well, we all knew it was coming. Nintendo finally revealed to us today that they will be releasing a redesigned version of their popular handheld, the DS, in the form of the the Nintendo DS lite.

The original DS, which was panned by many as ugly and too large for handheld has been trimmed down in this iteration, and gets a shiney new color for its svelte re-introduction.

Design wise, the control layout has also been modified. The start and select buttons have been changed in size and relocated. The power button has also changed positions.

Compatibility for the new device may be changed though.. GBA support is not confirmed at this point, but the mic is still there, and well the dual-screens keep the same dimensions, but this time they get brighter like the new GBA SP.

So far Nintendo has said that the system will be released in Japan on March 2nd of this year for a price of 16800 Yen (145 USD), which is slightly more expensive than the original DS. No prices or plans for release in other regions have been announced yet. 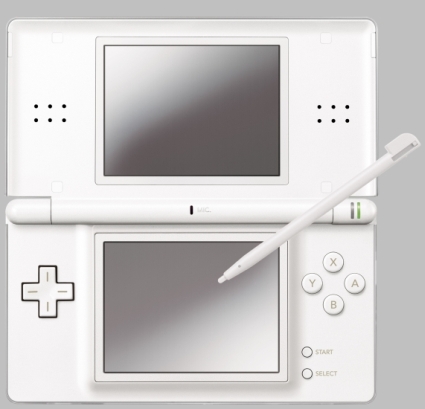