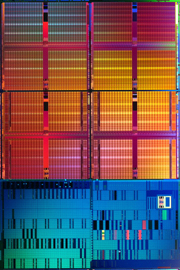 The main benefit of the 45-nm process, compared with Intel’s own 65-nm, is a 20-percent increase in switching speeds, a doubling of transistor density, and a 30-percent reduction in power. The company has no plans for mass production of a final 45-nm chip structure until mid-2007, although it said it would continue to refine the process using 193-nm “dry” lithography scanner rather than immersion tools for the next 15 months.

Intel officials would not confirm other specific details, except to reaffirm the company’s avoidance of SOI technology in the manufacture of the new chips.

NEC and Toshiba have made 45-nm announcements in recent months. But a senior Intel official went out of his way to position Intel at the forefront of that technological movement.

“I’ve seen the other announcements, but they don’t have the level of detail that we’re talking about,” said Mark Bohr, an Intel senior fellow and director of process architecture and integration.